A strong belief that everyone should have the opportunity to enjoy sport has led to one Tadcaster Grammar school student to follow her dream.

With determination and a passion to help others, 15 year old Jemima Browning has started Stingrays at Tadcaster Swimming Pool, a new swimming squad for young people with disabilities. What grew from a seed of thought is now a reality for the Year 10 student and her 13 year old brother Will who has Down's Syndrome and also attends Tadcaster Grammar school. "I have always loved swimming and strongly believe that everyone should have the opportunity to enjoy sport," said Jemima. "I have a brother with Down's Syndrome, who is developing his swimming skills and hoping to compete in the future". "He has enriched my life and taught me so much about what it means to be disabled and we should never put limits on what we think individuals can achieve".

Jemima has been swimming all her life and been a member of Tadcaster Swim Squad for five years. She competes at a local, county and regional competitions and volunteers as an in-pool assistant during swimming lessons at Tadcaster Swimming Pool. "Some time ago, I approached Fiona Garnett, the Swimming Development Manager at Tadcaster Pool and asked her about starting up a swimming squad for young people with disabilities, something I have always had a passion to do", said Jemima. "Fiona felt similarly and we have worked together on this project" she added. "I decided on a name and designed a logo for the Squad, and although we have had to go through a long process to secure funding, obtain backing from North Yorkshire Sport and find a qualified coach. Tadcaster Stingrays started four weeks ago and we have now been recognised by the ASA North East and feature on their website".

Fiona Garnett has nothing but praise for Jemima's efforts and said: "For many months Jemima has helped with our Junior Fit Club for older children and has pestered in a very nice way to start a more advanced group for children with disabilities, in the hope that we can eventually form a competitive club for these children. She is so enthusiastic and has gone that extra mile to encourage new members".

Tadcaster Stringrays is open to young people aged between 11 and 18 with learning and physical disabilities who can already swim unaided without armbands for at least 25 metres. Jemima explained that the club is all about inclusion and promoting sport for all. It is an opportunity for the young people to gain a sense of belongiong and to be proud members of a group.

"I see this as extremely important, as some people with a disability can feel so isoalated and different", said Jemima. "I want to stop every child or young person feeling this way, whilst keeping fit and having fun swimming, " she added. "As a group we pride ourselves on training together as a team.

The session runs on a Wednesday evening from 6.30pm - 7.30pm and costs £3 per session. Anyone who is interested should contact Kate O'Brien on 01937 833001 or ko'brien@tadcasterpool.org.uk 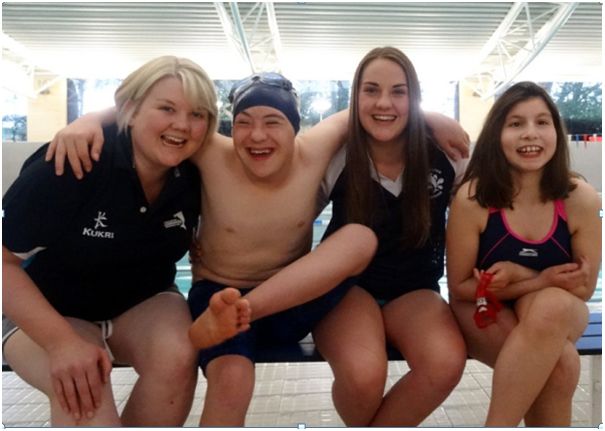